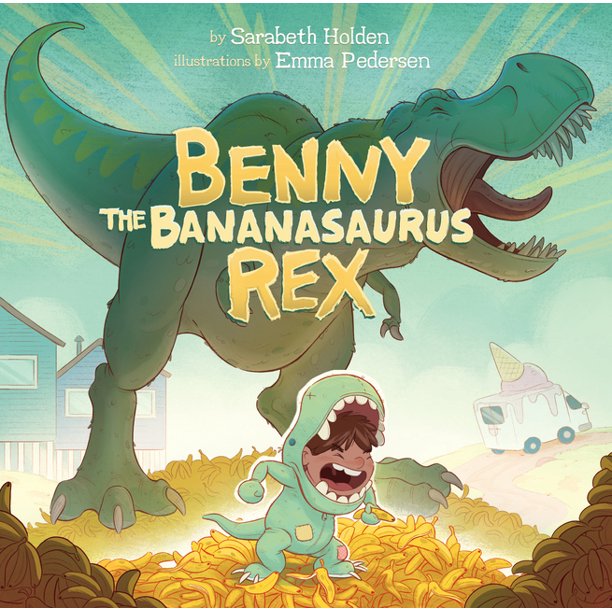 Author and entrepreneur Sarabeth Holden is happy to announce her second children’s book Benny the Bananasaurus Rex, published by Inhabit Media Inc., with illustrations by Emma Pedersen, will be available in Canada on September 20, 2022. Sarabeth Holden will also host a free book launch celebration on September 24 at Community Centre 55 in Toronto.

Benny loves bananas. He eats them morning, noon, and night. He even rides a bike with a yellow banana seat. In fact, Benny has a secret – he hopes one day he will turn into a banana! If there is one thing Benny knows, it’s that with a little imagination anything is possible.

Benny the Bananasaurus Rex is a funny and relatable story of a little boy who can be anything he wants to be (whether it’s a dinosaur, or a banana, or both!) with a big imagination and a bit of help from his anaana.

“Readers will notice that Benny calls his mom “Anaana,” and they might think it’s because it rhymes with “banana”. Anaana is the Inuktitut word for mom, and it’s the name that we use in our house because it is part of our Inuit heritage,” said Sarabeth Holden. “Grandmother is “Anaanatsiaq.” Benny shortens the word to call his grandmother “Siaq” as his term of endearment for her. I decided to use this wee bit of Inuktitut in this English book because I know we’re not the only home who uses different terms for family members, even though English may be the primary language spoken in our home.”

A multifaceted and well-rounded entrepreneur, Sarabeth Holden loves to cook, write, and be active – whether in sports or community action. In 2020 alone Sarabeth released her debut book Please Don’t Change My Diaper, and opened the bespoke Red Tape Brewery with her husband Sean. Sarabeth has worked as Senior Policy Advisor with the Government of Ontario, volunteered with several Indigenous organizations, and is the President of the Toronto Inuit Association. Sarabeth lives in Toronto with Sean, and their two young sons.

Benny the Bananasaurus Rex is published by Inhabit Media Inc., the first Inuit-owned, independent publishing company in the Canadian Arctic. Inhabit Media aims to promote and preserve the stories, knowledge, and talent of the Arctic, while also supporting research in Inuit mythology and the traditional Inuit knowledge of Nunavummiut (residents of Nunavut, Canada’s northernmost territory). The authors, storytellers, and artists bring traditional knowledge to life in a way that is accessible to readers both familiar and unfamiliar with Inuit culture and traditions.