Actress, model and activist, Sacheen LittleFeather, who made headlines for calling attention to discrimination and injustice against American Indians by publicly rejecting Marlon Brando’s Oscar for his role in “The Godfather” onstage at the Academy Awards  has died.

Of White Mountain Apache and Yaqui heritage on her father’s side, Sacheen Cruz Littlefeather appeared at the Academy Awards on behalf of Marlon Brando on March 27, 1973  and read a statement to protest Hollywood’s portrayal and mistreatment of American Indians. She addressed offensive cliches of American Indians perpetuated on film and television and drew attention to recent happenings at Wounded Knee. She created one of the most poignant and historic moments in Oscar history that was met with both booing and applause in front of a live audience and an estimated 85 million television viewers.

According to the Academy, the 26-year-old Ms. Littlefeather was the first Native American woman to appear onstage at the Oscars. Littlefeather had known Marlon Brando for about a year before she stepped onto the stage of the Dorothy Chandler Pavilion on his behalf. She declined the award he had received for playing Mafia boss Vito Corleone in “The Godfather.” Addressing the audience in a buckskin dress and moccasins, she explained that Brando, an activist for Native American rights, had written “a very long speech” but that she was unable to deliver it “because of time.” According to the Washington Post, she later said that the show’s producer, Howard W. Koch had threatened to have her arrested if she spoke for more than a minute.

Prior to her appearance, the Oscars steered clear of politics and social issues. But Littlefeather’s speech made a groundbreaking change. And she had closed her statement, “I beg at this time that I have not intruded upon the evening and that we will in the future, our hearts and our understandings, will be met with love and generousity.”

Today, actors and filmmakers often use their acceptance speeches to call out other injustices. Recently, she returned to the Academy as an invited guest of honor for an evening of reflection at the Academy”s museum. 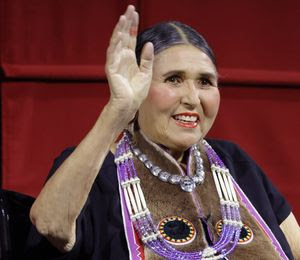 On September 17th, 2022, she received a formal apology from the Academy. Littlefeather said she was “stunned” by the apology. “I never thought I’d live to see the day I would be hearing this, experiencing this,” she said. Littlefeather had been suffering from breast cancer and died at her home in California on Sunday. Journey well Sacheen Littlefeather.

Watch Sacheen’s statement at the Oscars in 1973 here: